I recently shot a quick self promotion photograph of a model holding a champagne glass and watching a Sunset on Reigate Heath, Surrey. The image was pulled together at the last minute, due to my schedule and wanting the ideal weather conditions, despite the amazing weather we have had in the last few weeks. There has not been many clouds or there has been to much cloud cover at the time I wanted to shoot. I finally got my window of opportunity after the first wave of thunderstorms toward the end of July. This is an explanation of how the shot was created.

I found the location after many evenings walking from home to the Windmill at Reigate Heath Golf club. I was struck by the calm and tranquility  of the surroundings with the quiet occasionally interrupted by the metallic tang of golfers teeing off from the nearby golf course. As the Sun set the view and hills seemed to take on a grand ambiance. I returned with a camera and captured a basic wide/panoramic landscape image. I had not really intended to shoot into the Sun before sunset but while waiting for the Sun to vanish I took a few shots to review.

1) Here is the first image before the Sun set

2) and image after the Sun had set.

It was clear after reviewing the results that the winner was the shot before Sun set. The image shot into the Sun had a greater tonal range than I was expecting this was increased with enhancement in Lightroom using the graduation tool. The contrast was also excellent and this is mostly in part due to the amazing  optics of the 21mm Zeiss (Distagon T* 2,8/21) lens used. A fantastic lens for landscape photography by reducing flare exceptionally well.  The first image taken directly into the setting Sun struck me as a great image to use for an email announcing my recent relocation to Surrey. It is positive, bright and has the obvious connotations with bright horizons and new beginnings etc. It only lacked one thing a person.

I decided then that I needed a model to complete the composition and because the location is very close to the Reigate Heath Golf Club house restaurant/bar it must have one of the best views for dining and drinking in Surrey and so it seemed appropriate to have a model posed with a drink enjoying the setting Sun and views toward the north downs. I just needed my schedule, a model and the sky conditions to align. When they did one evening after a long hot day I grabbed my camera equipment two lights and raced to the location before the Sun started to kiss the horizon.

I had planned the lighting placement and new where I would need my two flash lights. As the model was placed very close to the camera position would certainly be in shadow I wanted to place my lights so that they complimented the existing and only other light source of the setting Sun. The position I chose to shot from had the added complication being on a slope downwards from the camera position and in my haste to leave and get to the location I had forgotten to bring anything to put under the light stands to make the ground level, in the end this was overcome with my camera bag and by using the club patio area.

I placed the first light (1.) in front and to the right of the model aimed slightly on her right side and front. The second light (2.) was placed on camera left much further away from the model and in the polar opposite direction of light (1.)  I took a couple of test frames and decided that the position of light (1.) was to directional and created obvious harsh shadows behind the models right arm as seen here.

Light (1.) was  positioned closer and more to the side of the model with the expectation that the shadows would shorten and soften. The second light (2.) also needed tweaking this was placed again to be more in  the opposite direction further forward and aimed back toward the model. In order to stop the slight stand from toppling over on  the ueven ground I put the handle of camera bag under one leg of the light stand. Ordinarily I would have an assistant hold the light or tie the stand down with weights and bungee cord. Both lights were unmodified SB800’s. It made sense to leave the lights bare so as to align with the suns very directional light fall. Exposure ended up being f/10 1/50th sec iso 100 with the lights set at 1/4 – 1/2 power I think, as I was working very fast I don’t recall the exact power level. I used an exposure which would give a good balance between the brightest area of sky and the foreground trees/foliage. I recall wanting as much depth of field as possible without exceeding the output from the lights. As the sun was brightest light source I worked quickly at finding the right aperture to expose the flashlights and then reduced the shutter speed to provide the exposure for the model sky and foreground trees. The unprocessed raw file would need work to further help balance the foreground and background this was achieved by using grad filters in Lightroom and curve layers in photoshop. Then adding colour correction, contrast layers and a solid colour layer of mid grey set to 27% opacity in a lighten blend mode to soften the dark shadow areas. Finally adding a subtle vignette mask to the edges to further bring draw your eye into the image.

Final result works very well and conveys the relaxed atmosphere and beauty of the location. It also demonstrates the importance of lighting on location. The result would not have been possible without supplemental lighting to add shape and detail. Post production was also an important element to balance the foreground with background and enhance contrast.

1 thought on “Quick location portrait lighting in the Surrey Hills” 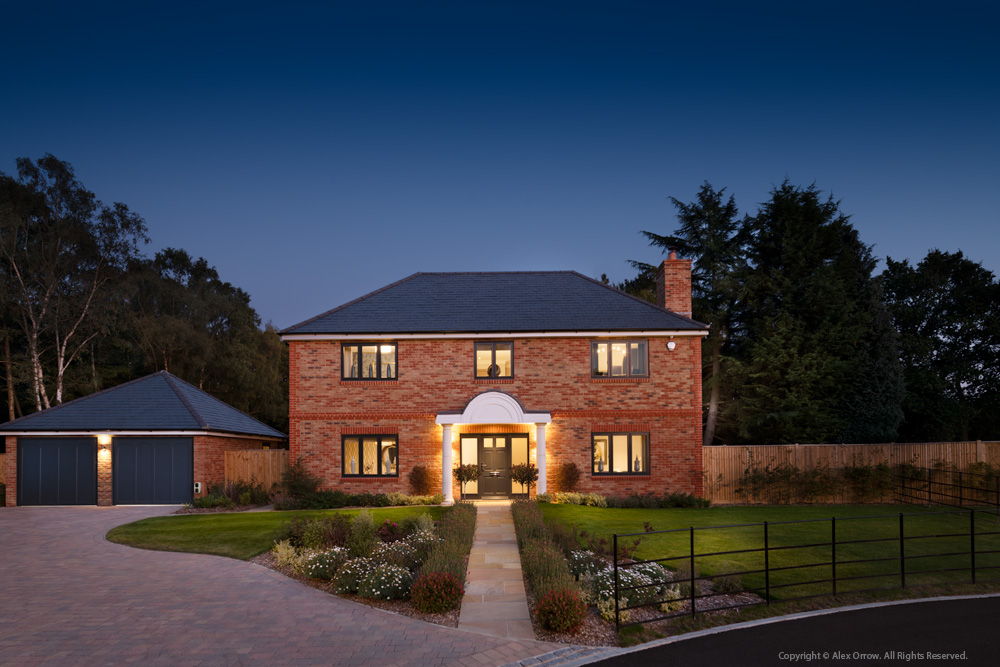 Architectural Photography Before and After Digital Processing

Before and after examples of the difference between a raw image and a digitally processed composite image for architectural photography. Read more about my architectural… Read More »Architectural Photography Before and After Digital Processing